Childbirth, Ikea, and submitting a novel to literary agents for representation: things I swore I’d never do again. Particularly the latter; if you’ve read MY POTHOLED PATH TO PUBLICATION, or ONE TO ONES, I’VE HAD A FEW, you know why. And those posts haven’t aged well; dear God, how smug I was, thinking I’d never need to run the agent gauntlet again!  But that was before my small friendly publisher decided to stop publishing fiction; unless I could somehow make my new novel into non-fiction – a bit of an ask, for a seventy-year family saga – I was back to square one. Un-agented, un-published and back in the muddier-than-ever submission trenches.

Out came the Writers’ Yearbook, the laptop and the sickening realisation that I was about to lose a sizeable chunk of writing time. Come back faffy postal submissions, all is forgiven. These days, most agents expect you to have Googled their client list, favourite novels, festival interviews, whacky Wish List (airport romance, anyone?) and their submission requirements designed to be just that bit different to that of whoever you last subbed. Honestly, it’s time to bring in some kind of UCAS-like process, rather than this fawning agent-fan fiasco; if they want new clients, how about they open a website and look for us, eh?!

Anyway. The new novel was the thing. I loved it, and wanted to give it the best possible start in life – which unfortunately meant going to the ‘publishing gatekeepers’.  Even though, after having gone through this process three times before, I felt a default loathing for these people. Once again, I rejigged the Submissions Spreadsheet of Shame, with its colour code highlighting of yellow for Submitted, orange for Full MS Requested, and a disgusting dark brown for Rejections. And once again, the spreadsheet soon started to look like a pile of poo.

But then the jolly orange Full MS Requests started to arrive. I got cocky and started subbing some of the Big Cheese agents I hadn’t bothered with – and a couple of them also turned (Red Leicester) orange. After a few months, I had 9 (NINE) Full MS requests; writing friends said I had it made, and I began to believe them. But the months started to pass, several agents asked for more time… and Doubt set in.

It was torture trying to get through more than half an hour without tapping the email button on my phone. I unsubscribed from nearly everything – even my darling White Stuff Clothing – to cut down on annoying non-agent-news notifications. There was that time I heard the whang of an email and was convinced, felt it in my bones, that it was going to be good news – only to find it was my son’s phone with a match on Bumble. Then a London number flashed up and I got The Agent Call – except it was an agent chasing up because their full MS request email had somehow bypassed my scrutiny and gone straight to junk mail.

Then the first rejections started to arrive. They were kindly and helpful, and I highlighted the agents in a sad but respectful grey. Maybe I should have coloured them a dawning-on-me pink, because what started to emerge is that I’d written a book they really liked but couldn’t sell. Eventually there was just one agent left on the wall, riddled with indecision, and I put her out of her misery with a little nudge. I submitted the novel to a few independent publishers, but they were similarly nonplussed.

It was very painful, this book bereavement, this need to put a whole world I’d created and lived in for two years in a digital drawer. I literally went through denial, anger and then acceptance – that it didn’t obey the insane but irrefutable marketing laws of genre. There was only one possible cure for me, and here in a nutshell is how I got my agent: I decided to write something new that did.

This coincided with the first lockdown and, missing my Spanish home, I got an idea for an escapist holiday read. But before I flew off with my usual obsessions, I spent a month reading similar books, to get the hang of what interested people who read this genre. The Spanish House was less literary than The Pier, but my heart was soon just as invested in it. With minimal wing-clipping, I soon had a new novel I loved and really believed in.

No Yearbook this time. I only sent ‘invitations to look’ to fifteen agents; anybody who hadn’t shown any interest at all in my beloved The Pier could go hang. Several weren’t looking for this genre or already had too much of it, but there were soon three Full MS requests, including a Big Cheese. Quite quickly this time, I got my answers: Big Cheese saw the novel going in a different direction; the second agent was overburdened, and once she asked about and approved of the agent who’d made me an offer, conceded. The third… was Kiran Kataria at Keane Kataria.

We didn’t have The Call, we had The Zoom – because it was August and I’d moved out to my own Spanish house and, going through the Spanish residency process, wouldn’t be in the UK for a while. Obviously, I’d already Twitter DM’d some of her authors – all of whom were ecstatic about her. But to finally hear somebody talk about the characters of your book as if they’re as real as they are to you, to have someone so believe in your writing that they’re happy and looking forward to working on the story and finding it a home… I’m still pinching myself, to be honest.

Six months on, and Kiran’s been everything I dreamt of in an agent: an insightful and painstaking editor; a calm but no-nonsense soother of my angsty author moments; and then a superb negotiator – of my three-book deal with Aria Fiction (Head of Zeus)! My only worry is she’ll see this and find too many I-don’t-think-this-is-the-word words. 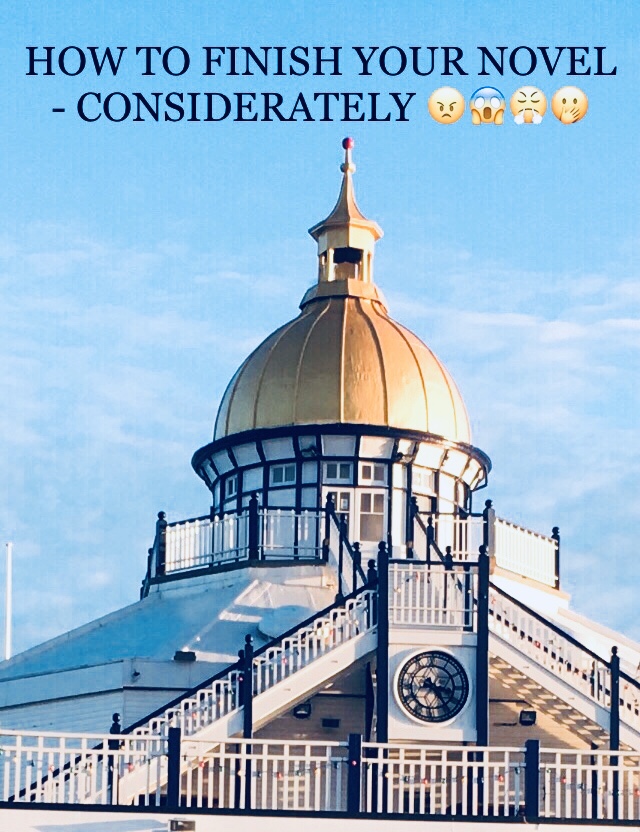 The transitional stage of labour has nothing on the final stages of writing a novel. 😫 I’m having my fourth (novel), but it’s no easier – or should I say, I’m no easier. I constantly shush my family; you’d think I was writing straight to Audio book. News of visitors coming  is met with screams of horror and finger counting of missed writing hours (including those needed to make the home and myself look non-deranged). At least I haven’t been as bad as during the final days of my first novel, when the family had me committed into the hotel down the road.

So, what’s my problem? It’s taken more than a year to get here; I should be thrilled. But:

So, how does one finish a novel considerately? I’ve no idea. But you should probably atone somehow, when it’s all over. Unfortunately, I can’t promise it won’t happen again; most unfeasibly, I’ve already been implanted with an idea for the next novel. 🙄

My previous tantrums produced The Lighthouse Keeper’s Daughter, published by Urbane Publications,  and you can get it from good bookshops or online e.g. https://amzn.to/2xQtuXY  💡🌊📘 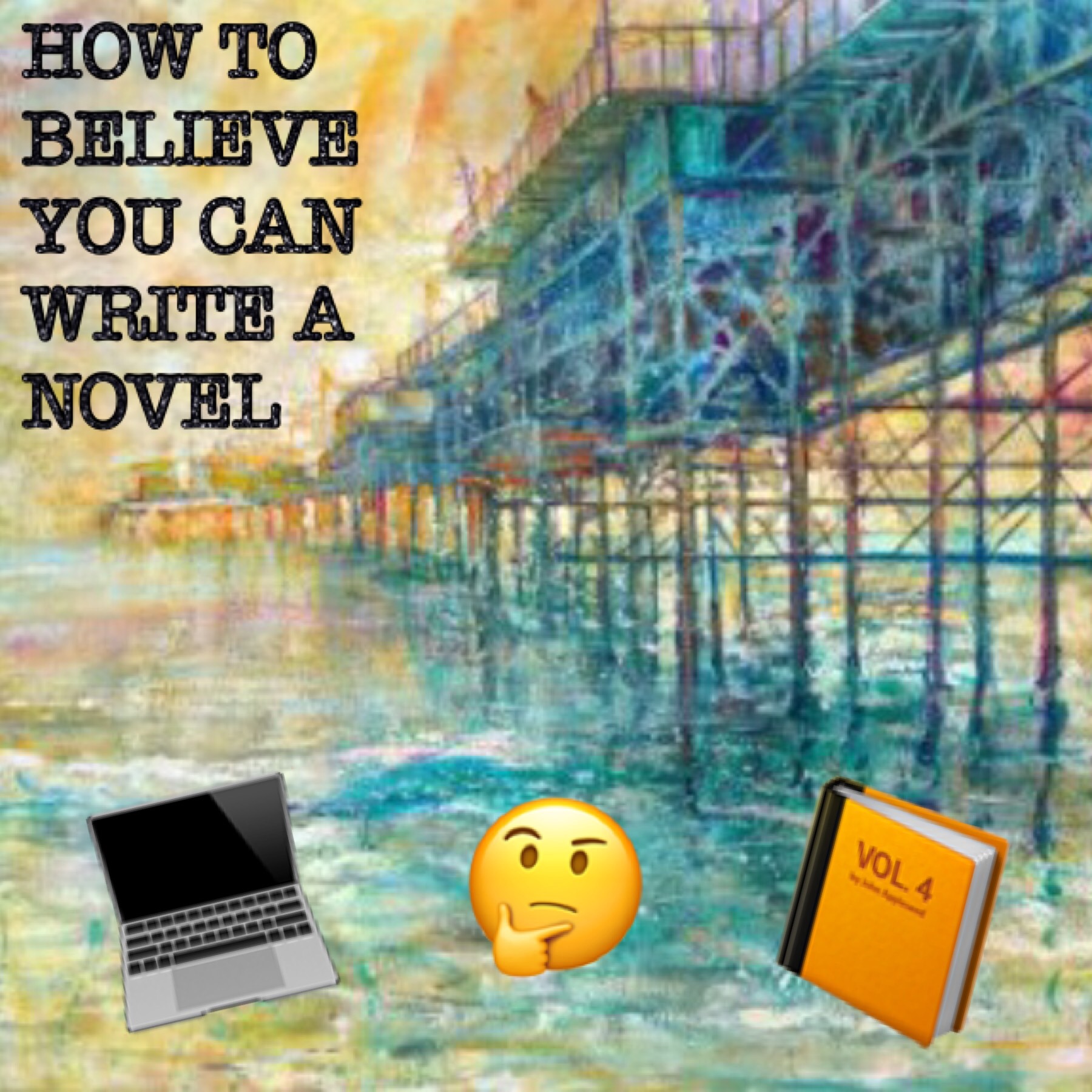 The leap of faith needed to write a novel has to be as downright daft as the final shot in Finding Your Feet – but without the option of a musically enhanced freeze-frame to stop you falling between canal edge and barge.

Even writing my fourth, I’ve been purposefully not glancing down at the yawning gap between my dawdling MS and a physical book, because lurking in the swirling waters below are the following two familiar questions:

A few months ago, this second question became impossible to ignore. It turns out there’s a reason why family sagas are chunky or in a series: unless you’re going to reduce some events in your 75-year story to mere bullet points, you just can’t cover it in my usual little 75K words.

‘Be not afraid of going slowly,’ says a Chinese proverb, ‘be only afraid of standing still.’ Believe me, when something’s going at a rate of 1mm per month, and you then discover there’s going to be several kilometres added to your journey, you’d best be VERY afraid.

So, here comes my top tip for getting a novel written. To have a chance of finishing it in my current lifetime, I started making myself WRITE A CHAPTER A WEEK. This game makes me grab writing time whenever I can – no more precious waiting for a whole free morning to get into the zone. Inessentials (laundry, tidying anything) don’t happen until I’ve done the chapter. Tuesday’s Bake Off marks the cake-fuelled half-way point, and I expect to be all done and smug for Saturday’s Strictly. I now feel that, unless I fall into a sinkhole or something, I WILL finish it. I even have a tentative date for that. NaNoWriMo freaks or bestselling cash-cow novelists would be appalled, but other writers might want to give this plan a go. You still don’t know if anyone will want to read it of course, but at least it shortens the gap between you and the barge or canal water.

My previous leap of faith landed me on a lighthouse. The Lighthouse Keeper’s Daughter (Urbane Publications) is available from Waterstones and other good bookshops, as well as online e.g. at https://amzn.to/2xQtuXY